A detour into the political history of England with Victor Davis Hanson.

Historically, Britain has looked more upon the seas and the New World than eastward to Europe. In that transatlantic sense, a Canadian or American typically had more in common with an Englander than did a German or Greek.

Over the last 30 years, the British nearly forgot that fact as they merged into the European Union and pledged to adopt European values in a shared trajectory to supposed utopia.

To the degree that England remained somewhat suspicious of EU continentalism by rejecting the euro and not embracing European socialism, the country thrived. But when Britain followed the German example of open borders, reversed the market reforms of Margaret Thatcher, and adopted the pacifism and energy fantasies of the EU, it stagnated.

Lessons from the data: Those peoples that trust their government, tend to have more economic liberty, which generally keeps gov’t size and power in check.

Source: Why Libertarians Should Want *More* Trust in Government – Reason.com 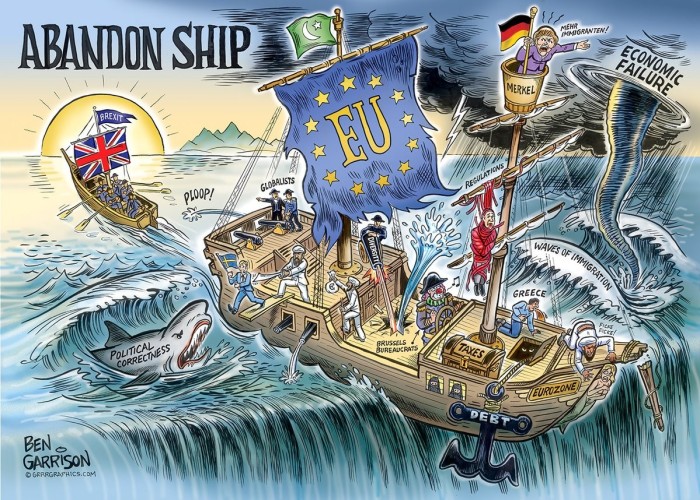 What an amazing vote. The people of the United Kingdom defied the supposed experts, rejected a fear-based campaign by advocates of the status quo, and declared their independence from the European …

That’s the argument that British economist Andrew Lilico made recently in an interview with Vox’s Timothy Lee—that while Britain has gained from being part of the EU, both entities will be better off apart, and that the split, while upsetting to markets in the short term, will ultimately pave the way toward long-term gains for both, with the EU becoming stronger and more unified in a way that it simply couldn’t with Britain attached. Britain, in this thinking, helped set EU culture early on, but was simply too independent to ever fully integrate with the continent. Post-Brexit, basically, the EU is free to become the United States of Europe.

I’m a little less confident that this scenario will play out. Britain’s exit from the EU is just as likely to lead to more sovereign squabbling and a further breakdown of the EU. But ultimately even that might be better in the long run, as the EU as it stands is a deeply dysfunctional governing body that has consistently proven itself unable to effectively respond to the challenges it faces. The design of the EU is inherently awkward: Its monetary union is undercut by its lack of a fiscal union, and its attempts to maintain some level of national sovereignty are undercut by its power imbalances andanti-democratic elements. The structure is inherently unstable.

Regardless of which way it goes, the Brexit vote is likely to spur the EU to take action and move beyond its current unstable equilibrium. It’s as clear a sign as any that the EU can’t go on doing what it’s been doing. It’s a wake up call, basically. So while there are certainly risks to a dramatic move like this, that’s a good thing overall.

In the meantime, Britain is probably better off no matter what. If the EU moves toward becoming the smoothly functioning super-state that Lilico hopes for, then Britain will have helped make that possible. And if the EU continues in its dysfunction, or breaks up further, Britain will have extricated itself, protecting its own interests.

Source: Britain’s Exit from the European Union Might Leave Both the U.K. and the E.U. Better Off – Hit & Run : Reason.com

I find it fascinating, if not reassuring, in the struggles for economic liberty that the same feeble arguments against free commerce and in defense of statism, even 166 years ago in post-revolutionary France, were peddled as progressive and as our salvation from the evils of commercialism on society .  It was a lie then, just as it is today.

That which is seen, and That Which is Not Seen; by Frederic Bastiat

While the exaggerated development of public services, by the waste of strength which it involves, fastens upon society a fatal sycophancy, it is a singular thing that several modern sects, attributing this character to free and private services, are endeavouring to transform professions into functions.

These sects violently oppose what they call intermediates. They would gladly suppress the capitalist, the banker, the speculator, the projector, the merchant, and the trader, accusing them of interposing between production and consumption, to extort from both, without giving either anything in return. Or rather, they would transfer to the State the work which they accomplish, for this work cannot be suppressed.

The sophism of the Socialists on this point is showing to the public what it pays to the intermediates in exchange for their services, and concealing from it what is necessary to be paid to the State. Here is the usual conflict between what is before our eyes, and what is perceptible to the mind only, between what is seen, and what is not seen.

It was at the time of the scarcity, in 1847, that the Socialist schools attempted and succeeded in popularizing their fatal theory. They knew very well that the most absurd notions have always a chance with people who are suffering; malesuada fames.

Therefore, by the help of the fine words, “trafficking in men by men, speculation on hunger, monopoly,” they began to blacken commerce, and to cast a veil over its benefits.

“What can be the use,” they say, “of leaving to the merchants the care of importing food from the United States and the Crimea? Why do not the State, the departments, and the towns, organize a service for provisions, and a magazine for stores? They would sell at a return price, and the people, poor things, would be exempted from the tribute which they pay to free, that is, to egotistical, individual, and anarchical commerce.”

The tribute paid by the people to commerce, is that which is seen. The tribute which the people would pay to the State, or to its agents, in the Socialist system, is what is not seen.

In what does this pretended tribute, which the people pay to commerce, consist? In this: that two men render each other a mutual service, in all freedom, and under the pressure of competition and reduced prices.

President Barack Obama, on the other hand, recognizes that most of the activities reported in the stolen pages are legal. As such, he wants to do something that might be even more radical than what France has done. He proposes making it illegal to legally reduce one’s tax burden. Falling back on some generic and zero-sum concept of tax fairness, he told reporters that we “shouldn’t make it legal to engage in transactions just to avoid taxes” and that he wants to enforce “the basic principle of making sure everyone pays their fair share.”

No matter what paper you read or what program you listen to, this story is couched only in terms of a groundbreaking discovery that exposes how everyone and every company linked to an offshore account has run afoul of the legal system. Not true.

Source: Bad Fiscal Policies Are a Worse Scandal Than the Panama Papers – Reason.com