“…the coronavirus has exposed the fault line between those who are subsidized by government and those who pay for government.

In her Wall Street Journal column, Peggy Noonan opines about how the “protected” don’t have to worry about the consequences of economic shutdowns.

“…Since the pandemic began, the overclass has been in charge—scientists, doctors, political figures, consultants—calling the shots for the average people. But personally they have less skin in the game. The National Institutes of Health scientist won’t lose his livelihood over what’s happened. Neither will the midday anchor. I’ve called this divide the protected versus the unprotected. …“

John Daniel Davidson of the Federalist echoes the benefits of having choices made at the state and local level.

The founders wisely chose a federal republic for our form of government, which means sovereignty is divided between states and the federal government. The powers of the federal government are limited and enumerated, while all powers not granted to the feds are reserved for the states, including emergency police powers of the kind we’re seeing states and localities use now. …Much of the media seems wholly unaware of this basic feature of our system of government. …Trump explained that many governors might have a more direct line on this equipment and if so they should go ahead and acquire it themselves, no need to wait on Washington, D.C. This is of course exactly the way federalism is supposed to work. …We should expect the government power that’s closest to affected communities to be the most active, while Washington, D.C., concern itself with larger problems.

“Little more than a decade after consumers binged on inexpensive mortgages that helped bring on a global financial crisis, a new debt surge — this time by major corporations — threatens to unleash fresh turmoil.

The root cause of the debt boom is the decision by the Federal Reserve and other key central banks to cut interest rates to zero in the wake of the financial crisis and to hold them at historic lows for years.“

From a microeconomic perspective, there is some genuine disruption for affected federal bureaucrats, even if they eventually will get full – and lavish – compensation for their involuntary vacations. And some federal contractors are being hit as well.

There’s also a debate about the macroeconomic impact, with some making the Keynesian argument that government spending is somehow a stimulant for the economy.

I’ve endlessly explained why Keynesian argument is bad in theory and a joke in reality.

I’m not sure I got my point across effectively in a 30-second sound bite, but it’s a point worth making since people who understand GDI are much less susceptible to the Keynesian perpetual-motion-machine argument.

But enough from me.

Harold Furchtgott-Roth, in a column for the Wall Street Journal, analyzes the potential macroeconomic consequences of the shutdown.

Does the U.S. government shutdown endanger economic growth? It has led to missed paychecks… Yet these employees represent approximately 0.5% of all American workers… The effect of the furloughs on gross domestic product is likely small. …U.S. GDP is more than $20 trillion annually, or approximately $55 billion daily. The daily compensation of furloughed federal workers

No matter how often new research is produced showing that low-skilled workers are hurt when politicians cut off the bottom rungs of the economic ladder, politicians persist in pushing for bad policy. 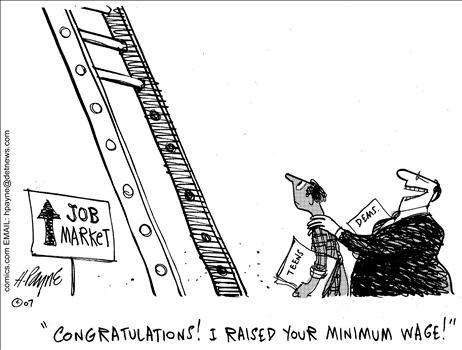 Many state already have increased minimum wages, and the “Fight for $15” crowd wants a nationwide increase.

So let’s explain, for the umpteenth time, why this is misguided.

We have lots of data and anecdotes to review, so let’s begin with some scholarly research from Europe.

Here are some results from a study in Denmark, where the minimum wage increases when workers reach age 18, at which point many of them lose their jobs (h/t: Marginal Revolution).

This paper estimates the long-run impact of youth minimum wages on youth employment by exploiting a large discontinuity in Danish minimum wage rules at age 18 and using monthly payroll records for the Danish population. …On average, the hourly wage rate

jumps up by 40 percent when individuals turn eighteen years old. Employment (extensive margin) falls by 33 percent and total labor input (extensive and intensive margin) decreases by around 45 percent, leaving the aggregate wage payment nearly unchanged. Data on flows into and out of employment show that the drop in employment is driven almost entirely by job loss when individuals turn 18 years old.

To elaborate, not only do jurisdictions such as Hong Kong and Singapore enjoy impressive growth, they also get very high scores for infrastructure, education, and health outcomes.

In other words, these nations are role models for “public sector efficiency.”

What they don’t have, by contrast, are expensive welfare states that seem to be correlated with poor outcome for basic public services.