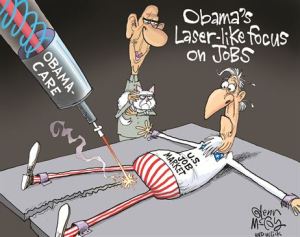 A reduction of 2.5 million FTEs from Obamacare would result in a reduction of $80.5 billion each year in gross compensation, even at the low-income average of $35,000 a year. That means less economic activity, and lower tax revenues, thanks to the decrease in income that the loss of 2.5 million FTEs entail — no matter how they disappear. Besides, if the argument in favor of cheering subsidized disincentives to work is to be offered, then we should know how those subsidies work and who benefits. The Obama administration has insisted that the Obamacare subsidy structure benefits middle and working-class families that most often feel the squeeze from government programs. A new study from the liberal Brookings Institute contradicts that claim. Instead, as the study shows, the redistribution comes from all but the bottom quartile of earners.

We linked to a review of the Brookings study yesterday. It concluded that with the exception of the bottom two deciles of income earners, Obamacare will reduce Americans’ incomes. According to the analysis, the income-contracting effects of the law hit lower-middle class families hardest. Fox Business is also revisiting aDuke University study released in December:

Almost half of the 500 companies surveyed are “reluctant” to hire full-time employees, the survey found, and one in 10 may lay off current employees in response to the law. Some people could see their hours cut below 30 hours a week because the Affordable Care Act requires companies with 50 or more employees to provide health insurance to those working 30 hours or more a week or pay a penalty.More than 40 percent of CFOs surveyed say their companies will consider switching some full-time jobs to part-time jobsin 2014. “For the employee, often what that means is you have to get a second job, or you just take a hit in the amount of money you make. So, it is quite disruptive,” Harvey said. Fallout also will hit benefits at many companies, with 44 percent of the CFOs surveyed saying they will consider reducing benefits.

The CEO of AOL told CNBC yesterday that Obamacare is blowing a $7 million hole through his budget, money he’s deciding how to recoup:


I eagerly await the erudite, and faintly desperate, explanations of why all of this is actually splendid news.