Whether it was Doc Adams on Gunsmoke removing a bullet from a cowboy lying on a kitchen table or Marcus Welby making a house call or Dr. McCoy scolding Captain Kirk about his health, they were always the “go-to guys” when things got tough.  Even when they couldn’t fix everyone or solve every problem, their patients took comfort by just the fact that they were on the job; there was an unspoken trust and their patients were assured that they would use every tool and skill at their disposal to help cure and mend.  And for sure, you would never catch them say anything about CPT codes, fee schedules, denials or claim forms.

That TV land view of what it was like to be doctor became as grainy as black & white reruns shortly after I began practice in the late 1989.  It didn’t take long to realize that I didn’t have a loyal following like my TV heroes.  When I started practicing, data indicated that patients would change Primary Care Providers (gate-keepers back then) for as little as a $7 change in their co-pay.  So much for loyalty.  It didn’t help that I practiced in mainly walk-in facilities, but even those patients that “adopted” us as their de facto PCP did so mainly for convenience.

Even when I joined a traditional private group practice in 1995 in a small rural community in southern Ohio, it was more about co-pays, deductibles, approvals and denials and very little about therapeutic relationships.  In the midst of concerns about call schedules, hospital politics, payer mix, billing headaches, claims denials, revenue cycles, collection ratios and accounts receivable there was one family in my practice that stood out.  They were memorable in a good way due to the absence of, not because of, insurance issues.  This family was the dreaded anomaly we in the profession call the “self-pay patient.”  Little did I know then that the term self-pay, and what it represents and the memory of that one family, would continue to nag at my professional psyche over the next 17 years.

The family consisted of a young husband and wife with two small children.  They were the personification of the working poor.  He made about $23,000 per year and the kids were too young for mom to work; nor could they have afforded child care if she did.  They made a commitment to raise their own children, no matter what the hardship.

Mom and Dad were polite, but not timid and quite intelligent.  The children were always clean and well behaved.  For reasons unknown to me, they the children didn’t qualify for Medicaid (or they were too proud to accept it).  They ran a perpetual balance at our office, but they always paid something after each visit.  They never missed an appointment and made sure the kids always received their immunizations.  They asked questions about medical necessity and costs of medications.  They were thankful that I always took time to listen and made the kids feel at ease.  They relied on me for ALL of their medical needs, because specialty care was not an option.  They knew me, liked me and trusted me; and sentiments were likewise from me to them.

It was shortly after my tenure with that group, and after returning to Emergency Room practice, that I read an article by Dr. Brian Forrest published in Medical Economics.  The story chronicled his journey leading to his founding of an all cash-pay, third-party-free primary care practice called Access Healthcare in Apex, NC.   Here is a more recent rendition: http://medicaleconomics.modernmedicine.com/medical-economics/news/modernmedicine/modern-medicine-feature-articles/how-get-third-party-payers-ou?id=&pageID=1&sk=&date=

His model turned my entire professional experience upside down; and I was really enjoying the view!  Instead of viewing self-pay patients as the anomaly, in his world they were the norm.  Furthermore, he didn’t avoid them, he sought them out.  His overhead was very small because he paid cash to all his vendors, thus receiving drastically reduced prices for lab tests and supplies.  He rented half of his building to a cardiologist, which covered his mortgage.  He didn’t have a billing department, or the expense of filing claims.  His fees were reasonable and patients paid at the time of services; thus his accounts receivable were near zero.  His simplified practice model gave him ample time to spend with patients and cash flow was consistent and closely matched to expenses.  He never had to tell any patient, “sorry, we don’t take your insurance.”  A wealthy, well insured client, used to drive several hours to see Dr. Forrest.  When asked why, his reply was something to the effect of “No matter how good my insurance, I can’t buy the amount of time and attention I get from you.  No one has the time to give it.”

After reading his story, my thoughts turned to my “self-pay” patients in Circleville, OH.  I couldn’t help but think how much of a better fit Dr. Forrest’s practice would have been for them; and for anyone for that matter, regardless of insurance status.  Given his markedly reduced over-head and subsequently lower cash fees, they probably wouldn’t have had that balance hanging over their heads perpetually.  They were like a fish out of water in our large third-party dominated group practice.  With Dr. Forrest, they would have fit in perfectly, as they should have.

The image and reality of what Dr. Forrest was able to do stuck with me.  He essentially succeeded in providing near “universal access” to care without one dime of insurance money.  How is that for a counter-intuitive approach?  As the years passed, the gulf between how medicine was actually practiced and how it should be practiced continued to widen, both in reality and within the ideal constructs of my mind.

Prices were, and still are, nearly impossible to know precisely for patients or physicians.  Value has become indeterminable due to this lack of market transparency, where prices are shrouded in complex contracts, ambiguous reimbursement schedules and scandalous revenue generating formulas.  When a patient asks about fees or prices of medical services, the knee jerk response has become, “What is your insurance?”, because prices have become meaningless.

Revenues are driven by how much work is documented in the chart, with little or no consideration to prudent care, needed care, timely care or whether the patient improved or was satisfied with the level of service.  Charting has become a billing ritual, rather than a means to tell the patient’s story and figure out the clinical puzzle.

What used to be joint decisions made between the doctor and patient have been replaced with benefit administrators and formulary managers.  The frequency and expense of tests ordered is directly related to whether the patient had met their deductible.  Pre-deductible discussions are always about price and post-deductible discussions are NEVER about price with most typical insurance network patients.

Specialists are selected not by their qualifications, but by whether they belong to the patient’s network.  And keep in mind, most of these considerations and issues involved medical care that should cost in the hundreds of dollars, but inflated third-party billing cause it to be in the thousands!

As the years went by, I began to witness more and more rules and regulations handed down from the hallowed halls of Government, regulatory bodies or insurance companies. Most of the regulatory or bureaucratic changes were instituted in the name of safety, compliance, progress, privacy or quality. However, it seemed that these interventions just complicated matters more for doctors and patients year after year.  The so-called “fixes” just piled on the compliance paperwork but didn’t help solve anything.

Some of my colleagues and patients would speak out and some just shrugged their shoulders, but virtually no one thought it was getting any easier to navigate the increasingly complex, confusing and frustrating system of third-party networks; including Medicare.  More time was spent complying with regulations, documenting every jot and tittle, seeking approvals for test, appealing denials for tests, validating coverage, submitting and resubmitting claims, etc….than was spent on taking care of patient’s needs.  There appeared to be no limit to the inertia of the system; patient were unhappy and doctors were stressed and discontented.  I became convinced that change could not be affected from working WITHIN the system.

I was getting more and more frustrated and disillusioned year by year.  I was enjoying work less and less, feeling more like a hired-hand than a helping-hand.  I came to the conclusion that I had to find a way to extract myself from the system that I was working in and making a good living in for over 20 years.

I had become a de facto employee and glorified gate-keeper/bill collector for the third-party payers, as opposed to working directly and solely for the patient’s best interest.  I felt disingenuous and frustrated and knew I had to do something. I decided to put my money & time where my mouth is!

So, in January of 2013 I started the planning stages of a third-party-free, Direct-Pay medical practice specializing in house calls and telemedicine where my fees are affordable on their own and I work directly for my patients.  I am happy to say I launched MyDoc-personal physician services on July 4, 2013.

I am even happier to say that I feel like a doctor again.  I don’t know if it’s as cool as Marcus Welby or Doc Adams, but I am really enjoying it.  I am working for my patients, and only for my patients.  I chart for medical documentation and recall, not to generate a bill.  I interact with my patients via multiple communication media without worrying if it is a billable event.  I work to keep them healthy, not to generate a bill by checking a bunch of boxes.

I’ll take the cowboy over the claim form any day.

An irony that never escapes me is the realization that what we seek in this country (care for all) could likely be achieved, if the product we associate with medical care (insurance) played a smaller role rather than a larger one. 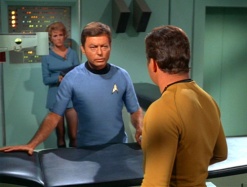 I can finally drop the insurance-created moniker of “provider” and start being a physician again.  To quote Dr. Leonard McCoy of the U.S.S. Enterprise, “damn it Jim, I’m a doctor!”

launches a project every month