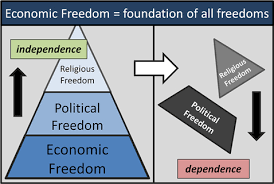 First, list countries according to whether they are closer to the free market or the communist end of the economic spectrum. Then rank countries according to per capita gross domestic product. Finally, rank countries according to Freedom House’s “Freedom in the World” report. People who live in countries closer to the free market end of the economic spectrum not only have far greater income than people who live in countries toward the communist end but also enjoy far greater human rights protections.According to the 2012 “Economic Freedom of the World” report — by James Gwartney, Robert Lawson and Joshua Hall — nations ranking in the top quartile with regard to economic freedom had an average per capita GDP of $37,691 in 2010, compared with $5,188 for those in the bottom quartile. In the freest nations, the average income of the poorest 10 percent of their populations was $11,382. In the least free nations, it was $1,209. Remarkably, the average income of the poorest 10 percent in the economically freer nations is more than twice the average income of those in the least free nations.

writes one short story every week