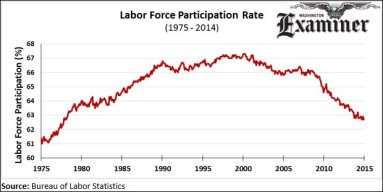 Sixty percent of job creation in 2014 was caused by the expiration of unemployment benefits, according to a new working paper published by the National Bureau of Economic Research.

The new new working paper found that the expiration of benefits was responsible for the creation of over 1.8 million jobs. Nearly 1 million of those jobs were created by workers who would have otherwise stayed out of the labor force if unemployment benefits had been extended. Overall, almost 3 million jobs were created in 2014.

via Study: 60 percent of 2014 job growth caused by expiration of unemployment benefits | WashingtonExaminer.com.