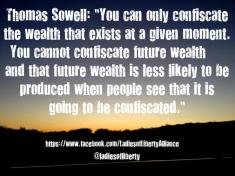 In the short run, though, the Venezuelan government gets to play Santa Claus. At least for 2016.

But it won’t have that option in 2017. And because the nation’s kleptocratic government is running out of victims, it’s just a matter of time before the system collapses, at which point the government either gives up power or launches a brutal crackdown.

Though it would remain to be seen whether the leftist thugs who currently hold power are able to escape the country with all the loot they’ve stolen, or whether they get the Ceausescu treatment.

They deserve the latter.

Earlier this year, I borrowed from Dante’s Inferno and created the Five Circles of Statist Hell. At the time, I suggested that Venezuela was on the cusp of moving from the third circle (̶…