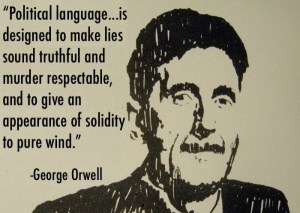 “Political language is designed to make lies sound truthful and murder respectable, and to give an appearance of solidity to pure wind.”

And again: “But if thought corrupts language, language can also corrupt thought.”

From 1984: “War is peace. Freedom is slavery. Ignorance is strength.”

Some males decide they are women…In just a few years, our laws and our society in general have accepted these gender migrations as valid…In short, we accept, or pretend to accept, the proposition that Joe can become Sally.

Except for some who still have eyes to see.

In an interview on feminism and transgenderism, feminist professor and writer Camille Paglia has this to say about the transgendered:

The cold biological truth is that sex changes are impossible. Every single cell of the human body (except for blood) remains coded with one’s birth gender for life.

Back to our man George:
“There was truth and there was untruth, and if you clung to the truth even against the whole world, you were not mad.”

This explains why Paglia in her writings and interviews sounds sane compared to many other progressives.

Some today believe that abortion should be an option up to the moment of birth…Yet these same people don’t blink when they say to a pregnant woman, “When’s your baby due?”

Why don’t they say, “When’s your fetus due?” Or to be more precise: “When does your fetus become a human being?”

If we believe in free speech, but ban speakers from our universities or riot if they appear, then what is free speech?

If we believe in freedom of religion, but then redefine the word as did the U.S. Commission on Civil Rights in 2016 – “‘the phrases “religious liberty” and “religious freedom”’ are nothing but ‘code words for discrimination, intolerance, racism, sexism…’” – then what does our Bill of Rights mean when it guarantees freedom of religion?

Politicians have undermined the language for decades. They call war a “police action.” An “investment in America” translates as “more taxes and more debt.” “Free education” and “free health care” means picking up the tab for some citizens while making slaves of others. “Illegal aliens” become “undocumented immigrants.” “Enhanced interrogation” is code for torture. “Collateral damage” stands for the killing of civilians during wartime. “Progressive politician” sounds wonderful – who is against real progress? – but refers to politicos looking for more power and more control over their fellow citizens.”

writes one short story every week