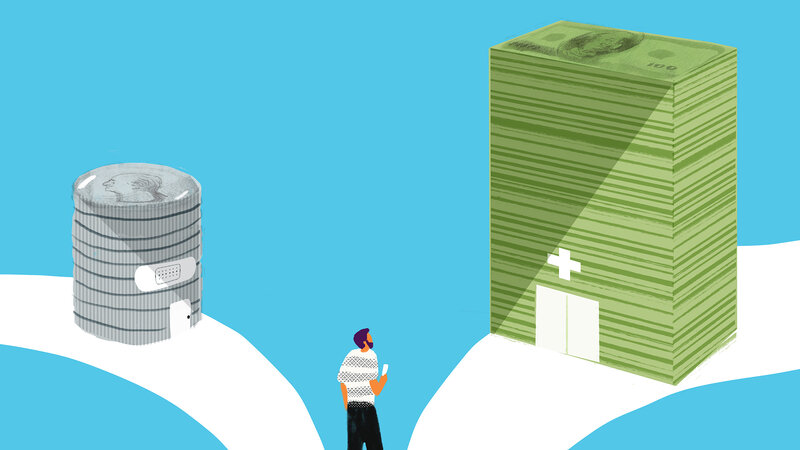 “Hynden was shocked when he got the second CT scan in January, and the listed price was $8,897 — 33 times what he paid for the first test.

Gulf Coast Medical Center is part of his Cigna insurance plan’s approved network of providers. But even with Cigna’s negotiated discount, Hynden was on the hook for $3,394.49 for the scan. The additional ER costs added $261.76 more to that bill.

The higher price from Gulf Coast and its parent company could be a result of their enormous pricing power in Fort Myers, says Gerard Anderson, a professor of health policy and management at Johns Hopkins University.

Lee Health owns the four major hospitals in the Fort Myers area, as well as a children’s hospital and a rehabilitation hospital, according to its website. It also owns several physician practices in the area. When you drive around Fort Myers, the blue-green Lee Health logo appears on buildings everywhere.

“Anybody who’s in Fort Myers is going to want to get care at these hospitals. So by having a dominant position, they have great bargaining power,” Anderson says. “So they can raise their rates, and they still do OK.”

Anderson says his research shows hospital consolidation has been driving prices higher and higher in recent years. And because more and more people, like Hynden, have high-deductible insurance plans, they’re more likely to be on the hook for huge bills.

So Lee Health and other dominant hospital systems mark up most of their services on their master price lists — the list that prices a CT scan at Lee Health at $8,897. Anderson calls those lists “fairy-tale prices” because almost no one actually pays them.

“Everybody who’s taken a look at it agrees — including the CFO of the organization — that it’s a fairy-tale thing, but it does have relevance,” Anderson says.

The relevance is that insurance companies usually negotiate what they’ll pay at discounted rates from list prices.