No matter how often new research is produced showing that low-skilled workers are hurt when politicians cut off the bottom rungs of the economic ladder, politicians persist in pushing for bad policy. 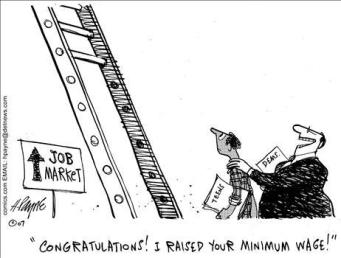 Many state already have increased minimum wages, and the “Fight for $15” crowd wants a nationwide increase.

So let’s explain, for the umpteenth time, why this is misguided.

We have lots of data and anecdotes to review, so let’s begin with some scholarly research from Europe.

Here are some results from a study in Denmark, where the minimum wage increases when workers reach age 18, at which point many of them lose their jobs (h/t: Marginal Revolution).

This paper estimates the long-run impact of youth minimum wages on youth employment by exploiting a large discontinuity in Danish minimum wage rules at age 18 and using monthly payroll records for the Danish population. …On average, the hourly wage rate

jumps up by 40 percent when individuals turn eighteen years old. Employment (extensive margin) falls by 33 percent and total labor input (extensive and intensive margin) decreases by around 45 percent, leaving the aggregate wage payment nearly unchanged. Data on flows into and out of employment show that the drop in employment is driven almost entirely by job loss when individuals turn 18 years old.