Above is the title of a recent Kaiser Foundation article regarding a survey of 742 adults age 18 – 64 who purchased their own insurance between April 3 to May 11, 2014.  After reading the survey and pondering it for a while, here are several titles that I feel are more apt for the subject matter:

2)  Tell me something I didn’t know (or didn’t anticipate).

3)  Nonsense in, nonsense out.

4)  Considering a population of 259 million non-elderly people, you would think we could come up with a better way to cover 8 million out of a group of 15 million people (non-group market) that would be well received by all those it was purported to help.

I am not criticizing Kaiser here.  They just reported what the survey found.

However, the disparate results of the survey should tell us something much more important than the percentages of this and that. There are a lot of nitty-gritty statistics that you can read in this survey if you wish, but here is the take home version. 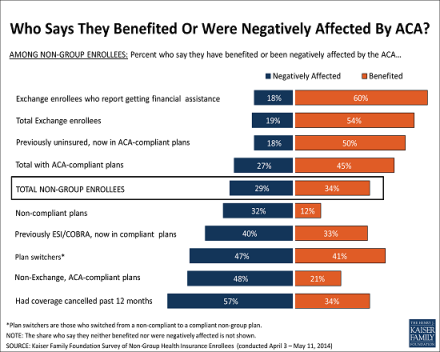 I quote from article:  “Among those who say they benefited, the most commonly cited ways are through lower costs and expanded access to care and insurance. Those who feel negatively affected are most likely to cite increased costs, with much smaller shares citing other concerns such as the law’s individual mandate, cuts to benefits or choices, and policy cancellations. There is significant variation in these perceptions by individual characteristics, with those who report getting financial assistance in the marketplaces most likely to feel they benefited, and those who say they’ve had a plan cancelled most likely to say they were affected negatively.”

Did I read that right?  Are we even talking about the same product here?

So are we to believe that the insurance offered to the non-group market seekers is both good and bad for the SAME reasons? If the ACA represents a viable “fix” for the problem, how can cost & access be both a detriment and a benefit. This can only be the case if: 1) Some people are forced to do something that is not in their best interest, and 2) other people are enticed to take the same action because of artificially low prices derived from subsidies paid by other people’s money.

That doesn’t sound like a product that can stand on its own value merit.

Let’s look at this from the beneficiary standpoint. So how can the same product, supposedly filling the same need for uninsured people be judged so radically different by people in different circumstances?   Maybe, just maybe, there is a flaw in the design.  A design that forces people to do something not in their own self interest due to perverse economic incentives, such that the product is only attractive to those who are in the most desperate of circumstances.

So let’s look at it from a policy standpoint.  How can a law that is supposed to fix one basic problem (lack of affordable insurance coverage) have such divergent effects on differing groups of people who apparently are accessing the same product?  Or, how can it have such divergent effects on similar groups of people with different tax filing statuses or employment situations?

There are multiple factors at play here, not the least of which are the litany of reasons why people enter the individual market and the high percentage of those same people who enter & exit the market in the same year. Basically, it is a segment of the population in extreme flux, representing only about 5 – 6% of the non-elderly.

The more important factor, in my opinion, is that the government treats employer-sponsored health benefits vastly different from individually purchased plans.  It does so by giving very generous tax breaks to employers and employee contributions, whereas those in the individual (non-group) market get almost no tax help or offsets when it comes to purchasing health insurance.  And this is true regardless of salary or hourly wage of the employee. This disparity existed prior to the ACA, but was never fixed by ObamaCare.  The government continues it’s biased, non-neutral approach to the individual market.  This inequity, along with ACA mandates, has all but pushed the private non-group market out of existence.  So much for the competitive market place that the ACA was supposed to usher in.  In political speak, maybe we should refer to this a the “war on individuals”.

The intellectual architects of the original-intent version of ObamaCare are more than pleased when anyone signs up for an compliant government exchange plan; and the heavier the subsidy, the better.  After all, for them the end-game is to move the market toward single payer.  They are equally as enthusiastic about disregarding subsidies when they tally the costs to the consumer.  They also don’t seem to mind that many compliant plans may have skimpy networks in the form of reduced choices in PCP/specialists and higher out-of-pockets costs for subscribers. As long as someone is “covered”, regardless of the limitations to access to care or costs, they check the box in the win column for ObamaCare: Mission accomplished.

Die-hard critics of the ACA, who don’t have a clear alternative plan, will point to the part of the survey that indicates folks with cancelled plans feel as if they were negatively impacted by the ACA due to costs, unfair mandates, less choices and canceled plans. – as if the pre-ACA landscape for those in the individual market was a walk in the park!

If we continue to view “reform” as nothing more than tinkering with the current third-party dominated healthcare landscape, then we will be stuck with some version of these two no-win outcomes.

These viable policy alternatives, combined with Direct Primary Care for routine primary medical needs, would bring a sea change to the Healthcare landscape by simultaneously controlling costs and increasing access.   That would make the basis of a future survey I will look forward to reading.