Several of the arguments in this case have credence on their face for different reasons.

There is the idea of an agreement or contract: “I do this, if you do that.” One should not break a contract carelessly.

Or, the “fairness” argument where one side seems to want to change the rules after the game started; that doesn’t seem right.

And, then there’s the constitutional rule of law argument: Congress holds the power of the purse when it comes to public monies. Enough said.

Bottom line…and in a different case, Qliance found this out the hard way…when you get in bed with the gov’t, expect to get screwed!

“Every health-care system in the world rations care in some way, either through bureaucratic fiat (Scandinavia, the U.K.), waiting lists (Canada), or price (that’s us). One can argue about which of these rationing mechanisms is fairest or most efficient, but let’s not pretend that it won’t occur.”

Our third-party payer system, by the nature of how coding & billing is contractually mandated, promotes increased health spending on aggregate – and the economic design of the system includes a perverse incentive to keep the spending going. 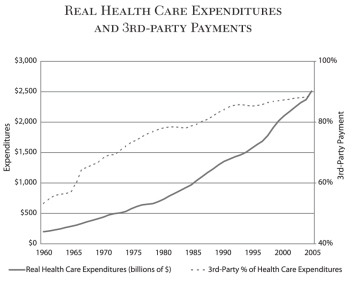 This occurs in large part due to price insensitivity on the consumer-patient side due to the low marginal cost of entry compared to the inflated CPT billed charges which serve as a pivot point for network discounts. i.e. ~ once a co-pay is paid, patients don’t have any incentive to know or care what is done or how much it costs.

These perverse motivations are what keeps premiums going up and up… Without utilization (claims), there is no other way to grow the pie because payers are not free to make a higher profit margin beyond the mandated cap, even if they do things to lower aggregate utilization which might lower premiums for everyone.  In other words, payers are not rewarded for efficiency, they reap financial reward to the extent that utilization, thus costs, continue to rise.

For those of us opposed to the economic catastrophe that is PPACA, this ruling may be a blessing in disguise.  More tomorrow on the intended and unintended consequences of the SCOTUS ruling.

But for starters, here is something to think about. We now know (per Gruber and many others) the portion of the law that ties subsidies to formation of State Exchange was intentional and DEFINITELY NOT an oversight as Judge Roberts as other apologists for PPACA would have us believe – leaving him “no choice” but to intervene in order to prevent chaos…. as if there was no other financial option besides the subsidies as prescribed and ineptly administered by the ObamaCare mandate.

via SCOTUS Rulings: a twitter poll would be quicker and just as meaningful | Robert Nelson, MD | LinkedIn.

I have been reviewing some Census Data and trying to make sense of what we have created relative to what it costs us versus what it could cost us as a nation, more on the public side to provide and receive healthcare. And the more I look at it the more convinced I am that the people we are sending to government must have failed all their math and statistical classes. In fact it may be why they went into government in the first place.

So some basic information to build context for my thoughts is needed.