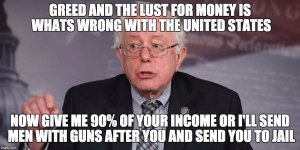 “Notably absent from Sanders’ proposed single-payer system was a detailed plan to pay for it. The senator said he would lay out the tax hikes necessary to fund his new system in separate legislation.

That may be because enthusiasm for single payer tends to die down pretty quickly once people get a sense of what sort of tax increases would be necessary to fund it. An Urban Institute analysis of a previous version of Sanders’ plan estimated that it would cost $32 trillion over a decade.

It promises huge overall savings along with coverage that would be far more expansive, and far more expensive, than Medicaid for all, with no clear way to pay for it, and no specific strategy for driving costs or spending down.

In 30 years of political advocacy, Sanders has not solved any of the fundamental problems with single payer. He has merely opted to pretend they do not exist.”

[Note: On annualized basis, that would more than double the amount we currently spend annually on healthcare.  And past projections related to the costs of gov’t programs always vastly underestimate the actual costs, as evidenced below. – The Sovereign Patient]

“The House Ways and Means Committee estimated that Medicare would cost only about $12 billion by 1990 (a figure that included an allowance for inflation). This was a supposedly “conservative” estimate. But in 1990 Medicare actually cost $107 billion.” http://reason.com/archives/1993/01/01/the-medicare-monster