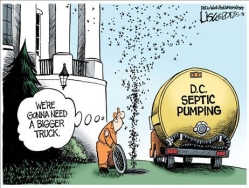 From an economic perspective, it certainly is true that this new system is “disorganized” and “a disservice” and an “insult to our intelligence.” Those same words could be used to describe the welfare state, the EEOC, farm subsidies, the tax code, and just about everything else the government does.

And the longer this sordid protectionist process continues, we will see a repeat of what happened with Obamacare as senior-level people in government move through the revolving door so they can get lucrative contracts to help clients manipulate the system (yes, Republicans can be just as sleazy as Democrats).

Washington wins and we lose.

I very much suspect Obama partisans and Trump partisans won’t like this column, but the sad reality is that both Obamacare and Trump’s protectionism have a lot in common.

To see what I mean, let’s travel back in time to 2011. I wrote a column about Obamacare and cited some very persuasive arguments by Tim Carney that government-run healthcare (or, to be more accurate, expanded government control of healthcare) was creating a feeding frenzy for additional sleaze in Washington.

Congress imposes mandates on other entities, but gives bureaucrats the…